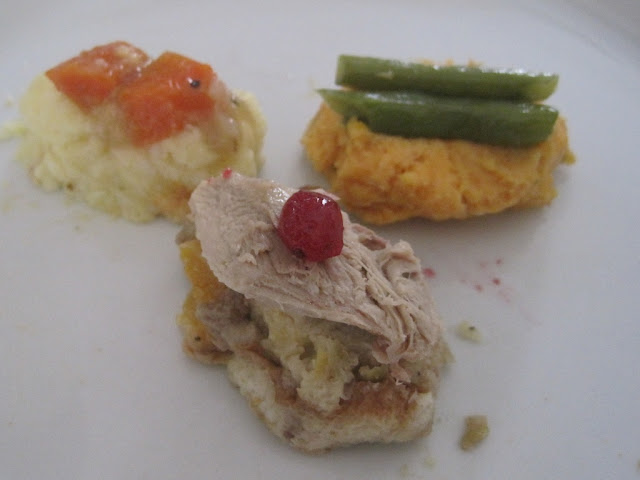 For lunch, we couldn't go out for sushi since we still had a lot of turkey and other leftovers from Thanksgiving dinner. So I made Thanksgiving sushi, as illustrated above. Then we got in the car and drove from Lafayette to Ann Arbor where we are safely home. We have no leftovers here so maybe we'll have fish sushi or some other not so Thanksgiving-y dinner.
Posted by Mae Travels at 5:42 PM No comments: 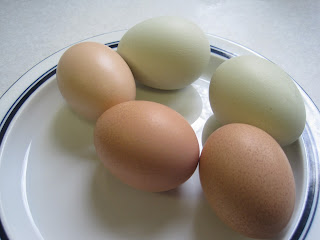 When I cracked them open, I could see how fresh they looked: 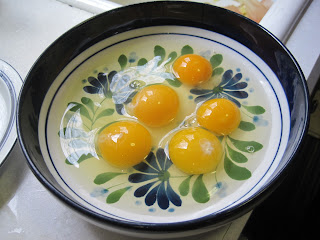 I made them into a tortilla espanola, that is, a potato omelet. 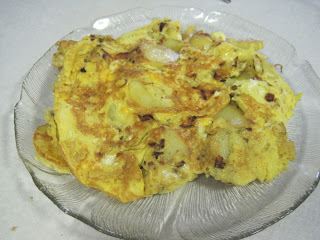 We have eaten it all! We are thankful to our neighbors for the lovely eggs.
Posted by Mae Travels at 4:22 PM No comments: 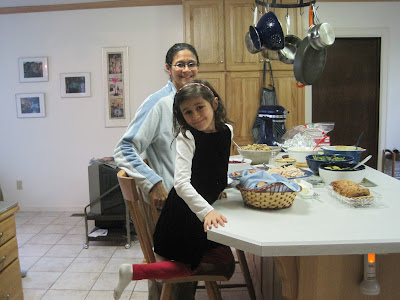 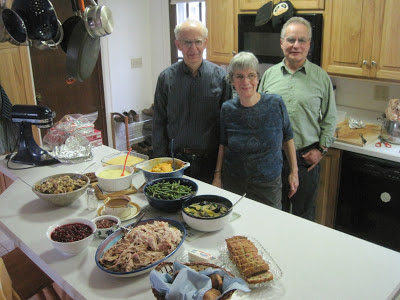 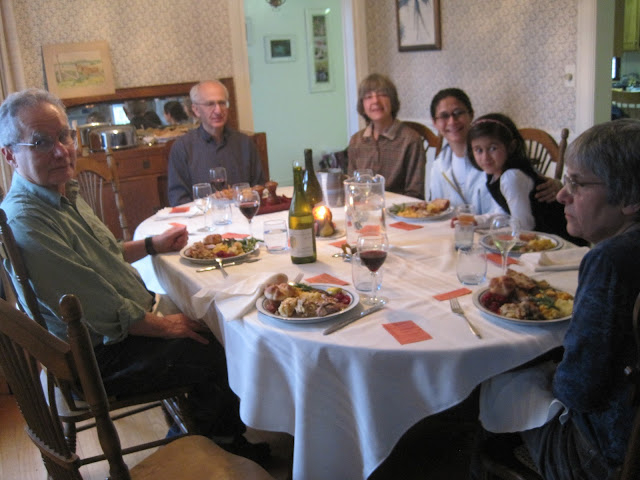 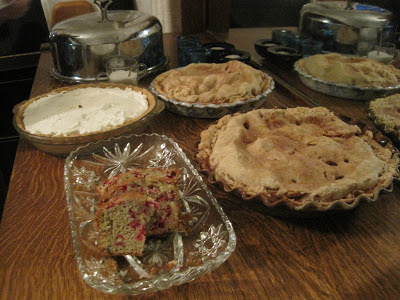 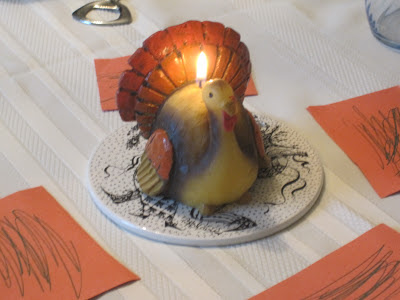 Our turkey centerpiece
Posted by Mae Travels at 9:27 PM No comments: 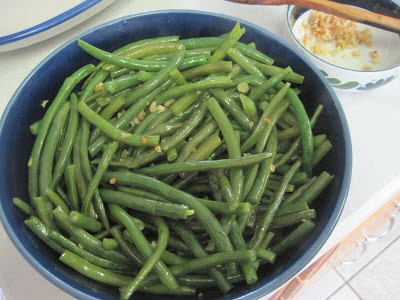 Posted by Mae Travels at 2:50 PM No comments:

By the time we arrived here in West Lafayette, the turkey was in the oven and almost everything ready to cook for Thanksgiving dinner, which will be later this afternoon. Also, Elaine had lunch all ready for us. What luxury!

After lunch, she recruited Len and Larry to make some roast vegetables on the grill outside. It's over 60 degrees -- perfect for a bit of outdoor cooking: 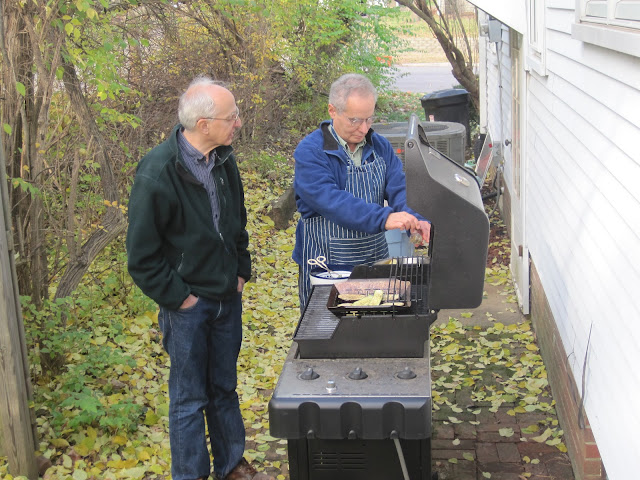 Delia was doing a little cooking in a frisbee before actually playing frisbee or jumping rope with Joel: 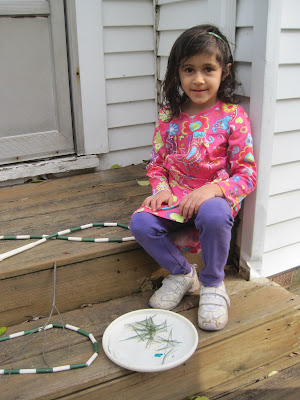 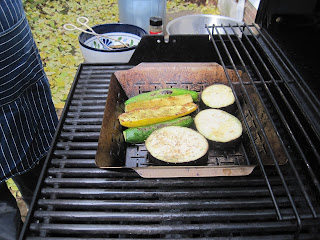 Vegetables cooking
Posted by Mae Travels at 2:27 PM No comments:

From the incomparable mathemusician Vi Hart, here is another video. She now has 4 Thanksgiving videos, and a Halloween video with a sierpinski gasket made from 6 bags of (triangular) candy corn.

Posted by Mae Travels at 4:39 PM No comments:

The End of the Twinkie 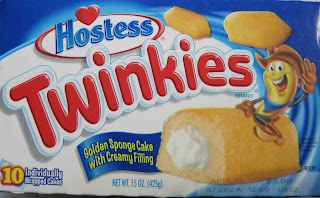 I had my last Twinkie a couple of years ago for Twinkie Day -- April of 2010. The funny thing, I wrote then, is that I remember thinking they were new when I first ate them as an elementary school child. That was long after 1930 when they were invented. Actually, I liked them. So after twinkieless years, I bought a package of 10 individually wrapped Twinkies. Despite the mile-long list of industrial ingredients, it tasted pretty good (the second helping, not so much).

And now there will be no more Twinkies. The newspapers are full of reports on the final dissolution of Hostess Brands -- the Washington Post even wrote an obituary: "A eulogy for the humble Hostess Twinkie." People are stocking up on them, though the recipe and process may be sold as part of the defunct corporation's assets, and thus the Twinkie may rise again.

I read a book about Twinkies once. Here's a selection from my report, also from 2010: 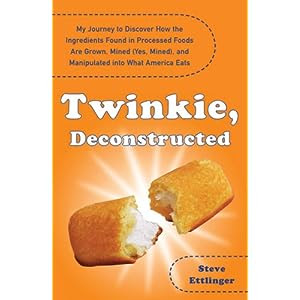 "Twinkies' buttery flavor provides the richness we expect from cake and likely also helps to mask their oiliness. Since due to cost and rancidity issues there's no room in a packaged cake like Twinkies for fresh butter, artificial butter is the answer. ... The most surprising thing about it is that it really stinks." In fact, we learn, many flavor chemicals smell "positively awful." Even natural flavors like vanilla have so many different flavor elements that some of them have unappealing notes, at least to some people.

"Memory is also important to taste.... When we eat a favorite snack cake, we expect it to taste exactly as we remember from last time, or from childhood." And we expect it to feel the same. In Twinkie Deconstructed, author Steve Ettlinger provides an ingredient-by-ingredient analysis of just how Twinkies are put together: the flavors of sugar, vanilla, and butter; the texture of filling and cake; and the way the cake stays dry and the filling stays creamy. I sort of reacted to this when I took a bite of the Twinkie, but I could also detect some of the chemical notes in its composition.

In all Ettlinger counted 39 ingredients listed on the package of Twinkies a few years ago. He points out that the recipe subtly changes over time -- my Twinkie box was indeed just a bit different, but of course sugary-buttery cake and creamy vanilla filling predominate. Two of the three main flavors, vanilla and butter, are present only in artificial form, and another expected component, eggs, is mainly there as artificial stabilizers, with maybe 1/500 of a real egg in each Twinkie.

I decided to buy a copy of Twinkie Deconstructed when I celebrated Twinkie Day as I described above. I found the book quite fascinating. I liked the description of each ingredient's function in creating taste or texture in the baking process, the history of the product or the story of its invention, and the descriptions of how each one is made.

In his quest to deconstruct the Twinkie, the author visited the manufacturing plants where most of them are milled, refined, mined (yes, chemical leavening comes from mines), assembled or derived (mostly from petroleum), and often secretly manufactured (as in the case of vitamins). His sense of panic when deep down in a soda mine was especially memorable. His text lists of other processed foods that use each of the components, especially the artificial ones. Even flour, the least processed ingredient, is a pretty highly processed substance. Did you know that some of the fat in Twinkies is from beef? Me neither. Wow!
Posted by Mae Travels at 3:29 AM 1 comment: 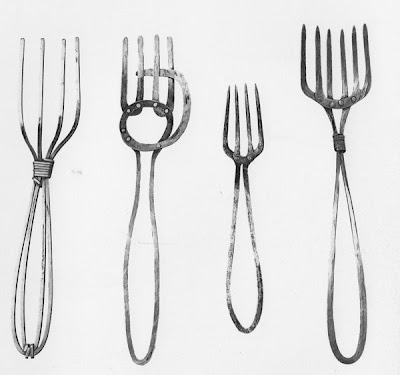 In the Los Angeles Times Today: "Alexander Calder's fanciful kitchen utensils" -- he'd make them for his wife when she needed something. I'm a big fan of his fanciful wire and metal objects, such as portraits and his circus. I wonder if I can find the book, Calder at Home, that these images are from.
Posted by Mae Travels at 7:20 AM No comments: