Rolling with the punches... 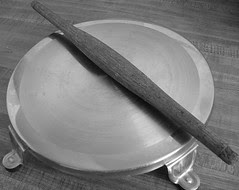 A few years ago, I was at a dinner party in NYC and met a wonderful German couple. It turned out that they were both vegetarians and enthusiastic home-cooks, and over the course of the evening, they asked me many questions about Indian food. One of the things they asked was, "Tell us, do you have the recipe for making the perfect roti"? I replied, "The dough is simply flour and water, with a touch of salt. Then you have to make rotis every day for 10 years, and you will know how to make the perfect roti". I was only half joking. The world's breads only call for the simplest of ingredients- flour, water, a touch of salt, sometimes yeast- but it can take years of practice, practice, practice to get them right.

The perfect roti is a sublime creation. Hot from the griddle, meltingly soft, it is one of life's simple pleasures to tear a piece off the roti, wrap it around a delicious curry and savor the taste of pure whole-wheat goodness. If I have one burning desire as a home cook, it is to learn how to make the perfect roti. The picture above shows the simple tools of roti-making, and I know the Marathi names for these: a small platform for rolling, called polpat (this is usually wooden, but mine is made of metal, and I do love how easy it is to clean), and the rolling pin or latne (called a belan in Hindi).

During all those years in NYC, my tiny kitchen (see the end of this post) made it genuinely difficult to make rotis on a routine basis. But starting with my move to St. Louis (and to a slightly bigger kitchen), I have been making rotis every 3-4 days with dogged determination. I know that, devoid of any inborn roti-rolling talent, my only choice is to persevere. This is what I have learnt so far.

1. Making the dough: Roti dough contains whole-wheat flour (the finely-ground Indian kind, called chapati flour or atta), water and a touch of salt. I use 2 cups of flour for 12 small rotis (perfect for serving 2 piggies or 3 normal people). When I tried adding any quantity of oil into the dough (with the intention of making it softer), I ended up with poor results. So I don't add any oil whatsoever to the dough. The dough is easily kneaded by hand, but I like using my food processor (with the dough blade). If you do use a food processor, please learn from my mistakes: I would place the flour and salt in the bowl, pulse it together, then leave the motor running and dribble in water through the feed tube until the ball of dough came together. This was a mistake. By the time the ball of dough comes together in the food processor, it is too wet! Now, I just dribble in water until the mixture is "pebbly" and forming small clumps of dough. Then, I take the mixture out and knead by hand for 5 minutes without adding any more water. Once a soft, springy ball of dough is ready, set it in a bowl, cover the ball with a damp cheesecloth and then place a cover on the bowl. Let it rest for 30 minutes. 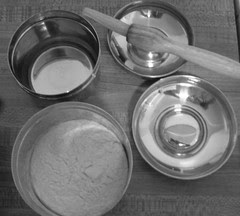 I have two containers dedicated to the roti-making process, as shown above. One contains atta, for sprinkling on the dough and on the surface while rolling it out. The other contains some oil (I use olive oil, you can use any vegetable oil or ghee if you feeling luxurious) to brush on to the finished rotis. I keep these containers handy, then place a griddle on the stove (cast iron is best, but I still don't own one, and make do with a non-stick pan instead).

3. I start by kneading the rested dough again for 2-3 minutes, then divide the dough into 12 little balls. Pat down the dough, score into quarters, then divide each quarter into 3 equal pieces, like so: 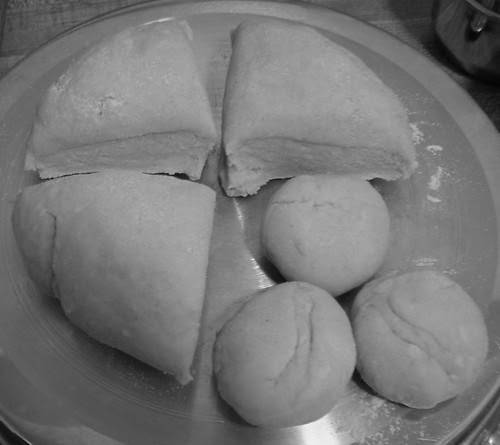 4. Dip each ball into the flour, dust off the excess then use the platform and rolling pin to roll it out evenly into a thin circle. I don't know what to say about this bit, other than, it is taking me some time to master! I then bake the roti on a hot griddle, without adding any oil, until brown spots appear on each side. 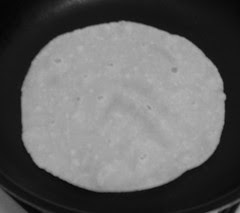 Now place the roti directly on the flame for a few seconds on each side. It will puff up (hopefully) and cook to perfection. This can be done either by lighting a second burner (on a low flame) or pulling the pan off for a few seconds at a time and using the flame under the pan. Usually, if I am making rotis alone, I light a second burner. But often, V and I make rotis together...I roll them out, and he roasts them, and in this situation, he can easily pull the pan off and use the same flame for the final puffing of the roti.

5. Finally, once the roti is cooked, I brush on a tiny bit of oil. So the roti only gets a touch of oil at the very end (not in the dough and not while cooking). 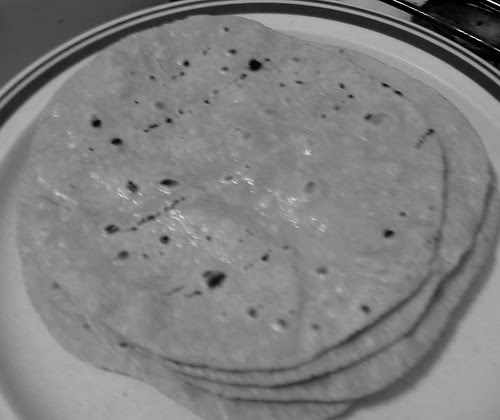 That is my little roti-making story. Right now, my rotis stand at a B minus, they are quite soft and edible when fresh but get hard and chewy in a few hours. Ask me in a few years, and I hope to proudly tell you about my A plus rotis! :) Meanwhile, if anyone has a tried-and-tested tip for improving my roti skills, I will be grateful for your advice.

Coffee of My Khazana of Recipes hosts a fun monthly event called Monthly Blog Patrolling. The premise is that you patrol the blogosphere, make a recipe from another blog and write about it. This month's theme is Let's Roll, where one has to find recipes that involve the use of a rolling pin! This event was just perfect for practicing my rolling skills. Here are my two entries:

When Asha sent in this delicious Carrot Roti as her contribution to the G of Indian Vegetables, I knew I had to make it right away. It is such a great recipe- taking a nutritious and colorful vegetable like the carrot and converting it into a healthy and tasty brunch. The only change I made in the recipe was to omit the oil from the dough. 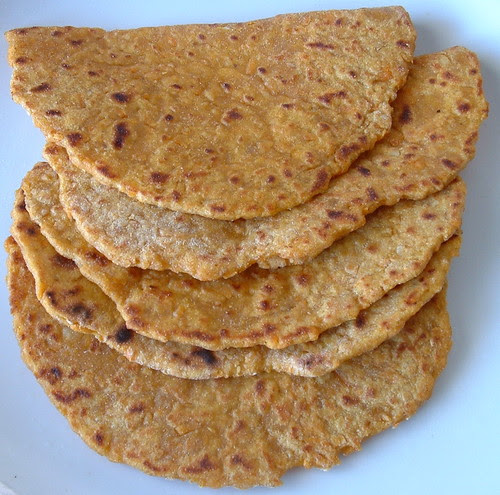 We enjoyed it very much, so thanks, Asha! I know I will be making this roti often.

The second recipe was also a must-try from the moment I saw it on Manasi's blog. She made this delicious Koki, a paratha traditionally made by the Sindhi community of India. I am such a fan of regional recipes, and made it right away. Again, the only change I made was to leave out the oil from the dough. The sesame and grated mango make this paratha completely delicious! I know I will be making this to take along on picnics and trips. Thanks, Manasi! 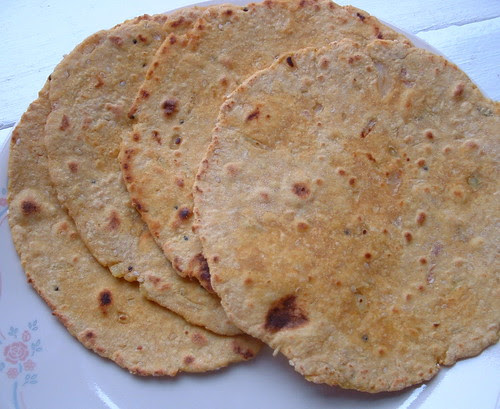 The spammers are out in full force so I've had to turn word verification on! Thanks for leaving a comment- I read and respond to every single one.